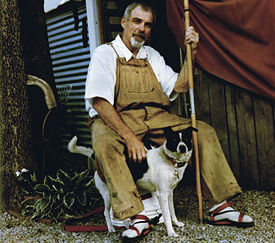 Jessie Frazier is an artist and musician.

Before his senior year in high school, he hitchhiked to Utah and became a Mormon. Late that summer, he and his mother moved to South Carolina. On a whim he tried out for the football team and earned a scholarship to play linebacker at Brigham Young University.

After graduating he taught high school English and earned extra money as a model. He quit in 1980 to move to Kobe, Japan, but struggled to earn money there. He ended up in a back yard near Phelan Park where he has constructed a portable shelter from found materials.

Frazier is associated with the improvisational music community in Birmingham and has performed with Craig Hultgren, LaDonna Smith, Davey Williams and others. He also designs and builds his own instruments, including a massive cast iron xylophone cast by U. S. Pipe and Foundry for a 1999 performance at Sloss Furnaces.

Frazier has also installed interactive sculptures at Horse Pens 40, the Hugh Kaul EcoScape at Birmingham-Southern College, and the Charles W. Ireland Sculpture Garden at the Birmingham Museum of Art.