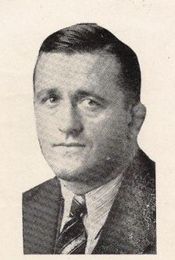 In 1935, under the management of Chris Jordan, Gunther won the World Middleweight Title from Gus Kallio. Three years later in April 1938, Gunther defeated Art O’Mahoney in the final match of a tournament to crown the first Southern Junior Heavyweight Champion. The championship was recognized in Louisiana, Alabama, Georgia, and Mississippi.

Gunther was one of the most popular wrestlers in the South. He had a clean cut, All-American look and was billed at various times as the Nashville Adonis, the Nashville Schoolboy, and the “Boy from Columbia Military Academy.” He told reporters than he was the son of a prominent Nashville banker.

He was considered a mat technician, and he said that when working out, he took time to study old wrestling holds and make them better. He often won matches with holds that he had named, like the neck stretcher and rocking chair split. He was known as a master of the Indian death lock. His neck stretcher was considered so effective that it was sometimes banned during matches so his opponent would have a chance at winning.

When he took control of the Birmingham promotion from Chris Jordan in March 1940, it was reported in newspapers that Gunther was a Center Point farmer.

Like Chris Jordan before him, mostly light heavyweights worked for Gunther. In 1940, a rival promotion in Birmingham, headed up by Sunshine Morton, used heavyweights. Morton didn’t take enough fans from Gunther to stay in business, even though he brought in big names like reigning World Heavyweight Champion Ray Steele.

Gunther was a major star in Louisiana, and he continued appearing on cards there as a wrestler, even after becoming promoter in Birmingham and Anniston. He also worked as a matchmaker in Louisiana and for a time was billed in promotional material as “New Orleans wrestling promoter.”

Joe Gunther enlisted in the army as a private on January 21, 1944, and his wife, Manda Gunther, took over the promotion during his absence. Nick Carter became matchmaker until he entered the army the next month. After Carter left, Joe Gunther helped his wife book the matches from his duty station at Camp Butner, North Carolina, and he showed up at the matches when he was on furlough.

After the war was over and Gunther left the army, he again began actively promoting in Birmingham and other towns and cities in Alabama, He also continued working behind the scene in Louisiana, especially New Orleans.

In January 1953, Roy Welch bought half interest in Gunther’s Alabama promotion. In May of that year, Clyde Walker of Birmingham bought the other half interest from Gunther.

In 1991, Gunther moved to Des Moines, Iowa. He died and was buried there five years later.