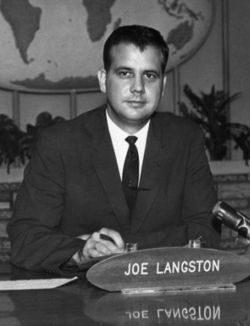 Langston graduated from Tuscaloosa County High School and began his career in broadcasting at WJRD-AM in 1950 while a student at the University of Alabama. He graduated in 1954 and served in the U.S. Army as a Radio Broadcast and Propaganda Officer at Fort Bragg, North Carolina. After his discharge he took a job as station manager of WNPT-AM in Northport.

Langston moved to Birmingham and began working at WBRC in 1963 as a co-host of the Tom York Morning Show alongside Tom York and Fannie Flagg. He later became the evening news anchor, sharing the desk with Pat Gray, Mike Royer and Herb Winches. Beginning in 1966 he was assigned to host the Saturday morning children's show "Birthday Party", which lasted for two years.

In 1969 Langston was promoted to "Director of News and Editorial Policy" for the station. Langston served as president of the Alabama Associated Press Broadcasters Association in 1971-72 and on the board of directors of the Birmingham Press Club in 1974-75.

He also served on the boards of the Tuscaloosa County Tuberculosis Association, the Alabama Arthritis Foundation, and the Alabama Multiple Sclerosis Society, and served as a deacon for Mountain Brook Baptist Church.

Langston briefly switched over to WVTM-TV in 1980, sharing the anchor desk with Pam Huff. He returned to Channel 6 in 1982, and then retired in 1987. He accepted an endowed chair in the Department of Communication at Jacksonville State University, where he remained until his retirement in 1998.

Langston was inducted into the Alabama Broadcasters Association Hall of Fame in 2009.

Langston died in 2014 at his home in Liberty Park. He was survived by his wife, Margaret, and two children, Joey and Susan.