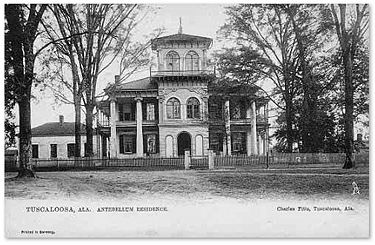 The John Drish residence, called the Drish House and originally Malone Place is an antebellum mansion located in a roundabout at 2300 17th Street in Tuscaloosa.

When Dr John Drish began construction of the house about 1830 it was located outside of town on a large plantation with a double row of elms leading from the gate lodge at the north entrance to the front of the house. Drish was a prominent homebuilder and he provided the design as well as the slave labor responsible for its erection.

The original house was a typical center-hall mansion decorated in the Greek Revival style with Doric columns on the two-story porticoes. A separate kitchen was constructed beside the house which was divided through the center by a wide hallway with a curving wooden staircase. The walls were constructed of brick, thickly stuccoed and scored to resemble stone blocks. In 1855 an Italianate-style addition brought Ionic columns and a three story brick tower to the front facade as well as cast-iron side porches designed by English architect William Nichols. 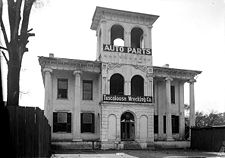 The house in use as parts storage in 1934. Photograph by W. N. Manning

Drish was in his bed one night in his tower bedroom when he rose suddenly and leapt over the stair railing to his death. As he laid in state his body was surrounded by an array of large candles. His widow, Sarah, had insisted that the same candles accompany her wake, but they could not be found when she died. Over the years numerous reports of fires have been reported in the house, but no fire or evidence of damage was found by those responding to the alarms. Further hauntings are said to represent the spirit of Drish's daughter, who reportedly lost her sanity after her father refused her marriage to a suitor. The ghost stories were related in Kathryn Tucker Windham's 13 Alabama Ghosts and Jeffrey. Members of the Tuscaloosa Paranormal Research Group visited the house in 2008 but did not record any evidence of haunting.

The Drish heirs sold the house to Colonel E. A. Powell, who sold it in turn to the Tennessee Coal, Iron and Light Company. The company sold it to Judge W. G. Cochrane, who turned it over to the Lilley and Snedecors families before it was given to the Tuscaloosa Board of Education. It was used as the Jemison School from 1906 to 1925. In this period the plantation and gardens were divided up into a residential subdivision with the house occupying the center of a prominent circle within the grid of streets. 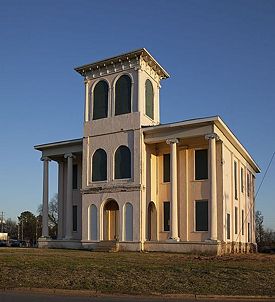 The Drish house in 2010. Photograph by Carol Highsmith

Later Charles Turner purchased the house and used the house as a parts warehouse for his Tuscaloosa Wrecking Company. The decaying splendor of the old mansion with a bold "Auto Parts" sign nailed over the door drew the attention of photographers documenting the Great Depression. W. N. Manning, Walker Evans and Frances Johnson each photographed the house in the 1930s. Over the years almost all of the interior and exterior details, including the side porches, were removed.

In 1940 the house was purchased from the city of Tuscaloosa by the Southside Baptist Church for $4,000. The church spent two years remodeling the interior and adding on to the exterior before moving into the former house in 1942.

A large brick sanctuary was completed on the west of the house in 1978. In 2007 the church turned the building over to the Tuscaloosa County Preservation Society which began stabilizing the historic structure. The sanctuary addition was demolished in 2009. In 2014 the society sold the house to a private owner.