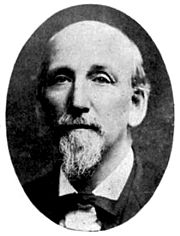 John Felix McLaughlin (born September 16, 1842 near Jonesboro; died after 1921) was a teacher and tax assessor for Jefferson County.

John was the son of Duncan McLaughlin. He was raised on the family's plantation near present-day Bessemer and educated in local schools until he enlisted in the 10th Alabama Regiment, assigned to Wilcox's Brigade in the Army of Northern Virginia for the duration of the Civil War.

McLaughlin was wounded at the Battle of Gettysburg and furloughed to Montgomery to recover. He rejoined his company and continued with them until the end of the war, after which he resumed farming until he found a position teaching in Helena, near the Harmony Church. In 1871 he married the former Ella Meredith and had four children, Maud, Anna, Willie and Jason. In 1896 he was elected tax assessor for Jefferson County and was re-elected in 1900, serving a total of nine years, during which his son James McLaughlin assisted him in his office.