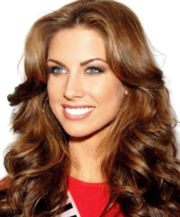 This article is about the model. See Katherine Webb (disambiguation) for more people with the same name

Katherine Elizabeth Webb (born 1989 in Montgomery) is a model and beauty queen. In 2007, Webb ranked in the top 15 for the title of Miss Georgia USA. She was crowned Miss Alabama USA for 2012 and finished in the top 10 in the Miss USA 2012 pageant.

Webb graduated from Auburn University in 2011. At the time she won the Miss Alabama USA title in late 2011, Webb was working in Columbus, Georgia in public relations for Chick-Fil-A.

Webb gained national attention during the 2013 BCS National Championship Game, when ESPN cameras showed her during their broadcast. She was the girlfriend of Alabama Crimson Tide quarterback A. J. McCarron at the time, whom the Los Angeles-based model met in late 2012 via Twitter.

Following the game, Webb was included in the 2013 Sports Illustrated swimsuit edition, made talk show appearances including Late Show with David Letterman, and was a contestant on ABC's celebrity diving show Splash.

Mobile native McCarron proposed to Webb in Gulf Shores on March 28, 2014 and the couple were wed the following July 12 at Orange Beach United Methodist Church with a reception at The Wharf in Gulf Shores.