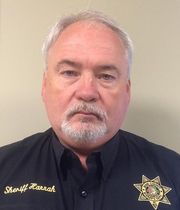 Keith Hannah (born July 1, 1966 in West Blocton; died November 16, 2016 in Centreville) was the Sheriff of Bibb County from January 2003 until his death by suicide.

Hannah was the son of Pete and Norma Hannah. He joined the Sheriff's office in 1987 and was elected to four terms as Sheriff. He and his wife, Frankie, were married in 1991 and had two sons, Michael and Jake.

A federal lawsuit filed on behalf of Tammy Murphy Carpenter claims that Hannah conspired with businessman Harold Randolph to protect her former boyfriend, John Barry Hubbard from prosecution after she reported on May 21, 2015 that he had violently raped her two weeks earlier. The suit further claims that Hannah allowed Hubbard to continue to "terrorize" her with threats of violence, including vandalism and gunshots. On July 21, 2015 Hubbard abducted Carpenter after murdering her sister, Kandi. He was arrested the following evening in Eutaw.

Hannah shot himself in the head in a restroom adjoining his office on the second floor of the Bibb County Courthouse in November 2016. Bibb County Coroner Downey McGee, who was serving as acting Sheriff, ruled the death a suicide. Hannah was buried at Reno Baptist Cemetery in McCalla.