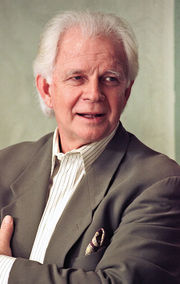 Kenneth Michael Stabler (born December 25, 1945 in Foley, Baldwin County; died July 8, 2015) played quarterback for the Alabama Crimson Tide football team and in the NFL for the Oakland Raiders, Houston Oilers and New Orleans Saints. He was nicknamed "The Snake" for his elusive scrambling ability at quarterback.

Stabler was the son of Leroy and Sally Stabler of Foley, and became a highly-touted football player at Foley High School. He led Foley to a won-loss record of 29-1 over his high school career - the only loss coming against arch-rival Fairhope. He was an all-around athlete in high school, averaging 29 points a game in basketball and excelling enough as a left-handed pitcher in baseball to receive minor-league contract offers from the Houston Astros and New York Yankees.

He was recruited by Alabama's Bear Bryant and joined the team in 1964. At the time, freshman were ineligible, and were not allowed to play in accordance with NCAA regulations, so Stabler did not participate in the 1964 season. As Stabler sat out the season, he watched his Crimson Tide win its second national championship under Bryant. In 1965, with Joe Namath having graduated and Stabler becoming eligible to participate, he split time with Steve Sloan at quarterback, and combined they led Alabama to a national championship with a thrilling 39-28 win over the Nebraska Cornhuskers in the Orange Bowl. In 1966, as a junior, Stabler took over the starting job full-time, and led Alabama to a perfect 11-0 season, capped by a blowout of Nebraska, this time in the Sugar Bowl. The Tide, coming off of back-to-back national championships, and having gone undefeated in 1966, was nevertheless snubbed at the polls, finishing third in the nation behind Notre Dame and Michigan State. In 1967, expectations were high for the team as Stabler was finally a senior, but it turned into a lackluster year. The offense, with Stabler at the helm, struggled at times, and the defense's performance slipped too. Alabama finished 8-2-1, its worst season since Stabler was a freshman in high school, 1960. The 1967 season, however, is particularly memorable for Stabler, with his game-winning touchdown run against rival Auburn. Trailing 3-0 in a game that was mired by a horrendous rain, Stabler scampered around right end for a 47-yard touchdown run, giving the Tide a 7-3 victory over hated rival Auburn. This run has been dubbed, "The Run in the Mud" in Alabama football lore, and has been captured twice in the paintings of famed sports artist Daniel Moore.

All told, Stabler finished his career with the Crimson Tide in 1967, having compiled a 28-3-2 record as a starter. 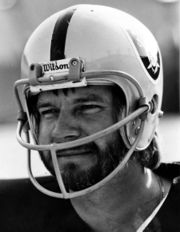 He was drafted in the second round of the NFL draft in 1968. Stabler first made his mark in the NFL in a 1972 playoff game against the Pittsburgh Steelers. After entering the game in relief of Daryle Lamonica, he scored the go-ahead touchdown late in the fourth quarter on a 31-yard scramble. The Steelers, however, came back to win on a controversial, deflected pass from Terry Bradshaw to Franco Harris, known in football lore as The Immaculate Reception.

After suffering severe knee injuries, Stabler became less a scrambling quarterback and more a classic, drop-back passer, known for deadly-accurate passes in the 10-to-20 yard range and an uncanny ability to lead late, come-from-behind drives. During the peak of his career he had an impressive receiving corps consisting of sprinter Cliff Branch, sure-handed possession receiver Fred Biletnikoff, and Hall-of-Fame tight end Dave Casper. As a starter in Oakland, Stabler was named AFC player of the year in 1974 and 1976, and was the NFL's passing champion in 1976. In 1977 he guided the Raiders to their first Super Bowl victory, after a narrow playoff victory over the New England Patriots in which he scored the winning touchdown on a surprise quarterback keeper. In the 1977 AFC Playoffs against the Baltimore Colts he threw a crucial 4th quarter pass to Dave Casper that set up a game tying field goal that sent into overtime in which the Raiders eventually won; the 4th quarter pass was dubbed the Ghost to the Post.

In 1980 he was traded to the Houston Oilers for Dan Pastorini, whom Raiders' owner Al Davis regarded as a more effective deep passer. The Oilers in turn saw Stabler as the missing ingredient that could finally get them past the Steelers and into the Super Bowl. Pastorini lost the starting job in Oakland to Jim Plunkett after an injury, and Plunkett then led the Raiders over Stabler and the Oilers in the playoffs. Stabler played one more season with Houston and then finished his NFL career with a three-year stint with the New Orleans Saints.

For several seasons Stabler provided color commentary alongside Eli Gold for broadcasts of Alabama football, and hosted a sports talk show in Birmingham on WERC-AM.

Stabler has been arrested for driving under the influence three times. He pleaded no contest in Escambia County, Florida in 1995, and pleaded guilty to DUI in Orange Beach in 2001. He was arrested in Robertsdale near his hometown of Foley on June 8, 2008. He took a leave of absence from the Crimson Tide broadcast team for the 2008 season. Tom Roberts took his place.

Stabler died from colon cancer in July 2015, and was survived by three daughters and two grandsons. His brain and spinal cord were donated to the Chronic Traumatic Encephalopathy Center at Boston University to support research into degenerative brain conditions in athletes.