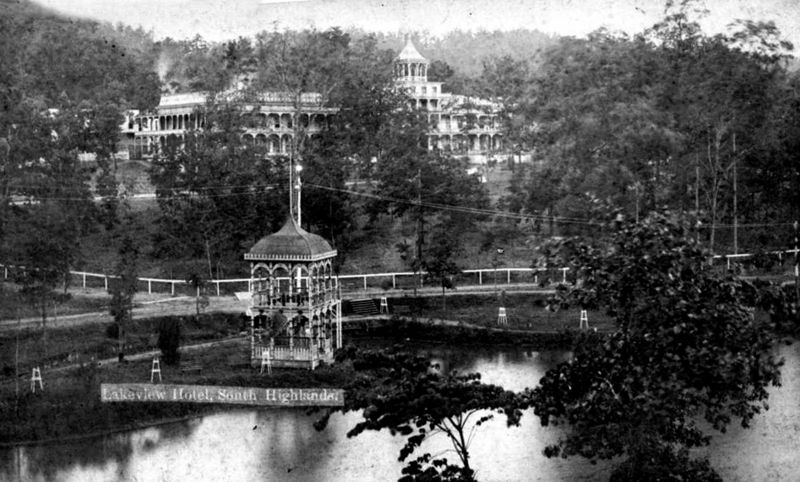 The Lakeview Hotel was a resort hotel constructed by the Elyton Land Company at Lakeview Park, the terminus and major attraction for its Highland Avenue Railroad on the slopes of Red Mountain in Birmingham's Southside.

The 60-foot by 250-foot wood-framed hotel opened on July 12, 1887 with a Mr H. S. Dawson as the first registered guest. In addition to its 72 guest rooms the hotel featured a spacious lobby and dining room, several parlours, a ball room and a billiard room. The hotel was furnished throughout with electric lighting and bells, and with steam heat.

Linscott and Davids took over as managers on April 1, 1888. An addition of sixty rooms was planned for that summer. The hotel managers also operated a number of small, ornate cottages that were constructed on the mountainside. On June 12, 1891 a hot air balloon being demonstrated by Charles Swinney landed on the roof of the hotel.

The hotel is said to have been visited by Presidents Grover Cleveland and Benjamin Harrison in November 1888 and April 1891, respectively, but there is no indication that either was an overnight guest in Lakeview.

With the end of summer, crowds thinned and the company was unable to continue operating the hotel. It closed on August 21, 1891 and Henry Caldwell invited the Southern Female University to relocate from Florence, Lauderdale County, and occupy the building. The faculty and most of the student body arrived at Union Station on October 14, 1892 and were said to have been greeted by a crowd of 10,000 well-wishers.

The building burned to the ground on December 6, 1893. One student, Minnie Dean of Warrior, lost her life when she entered the building to retrieve some of her jewelry. The school re-opened in the former Anniston Inn in Anniston the next spring. Later renamed the Anniston College for Young Ladies, the school disbanded in 1909.

The park continued to attract summertime crowds, The park pavilion began operating as a theater until it was torn down in 1900. In 1903 the entire park was leased to the Birmingham Country Club. It was dedicated as a public park in 1927.