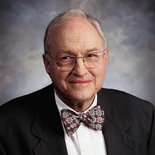 Larry D. Striplin Jr (born November 11, 1929 in Selma; died January 23, 2012 in Birmingham) was a businessman, coach, athletic director, and philanthropist. He was CEO of Nelson-Brantley Glass Company and Circle "S" Industries, and was instrumental in establishing the Alabama Sports Hall of Fame's museum.

Striplin was born to Larry D. and Ethel Henderson Striplin and graduated from A. G. Parrish High School in Selma. He attended Spring Hill College in Mobile, and graduated from Birmingham-Southern College in 1951. He received his MA in Education from George Peabody College in Nashville, now known as Vanderbilt University.

In 1952, Striplin established the first men's basketball team at Belmont College in Nashville, serving as coach for four years. He was also the baseball coach and the college's Athletic Director.

In 1963, Striplin purchased Nelson-Brantley Glass Company and has been CEO since that time. In 1971, he founded DISCO Aluminum Products, and in 1977 founded American Fine Wire, which became one of Selma's largest employers. Striplin sold off most of Circle S in the early 1990s, and sold NelBran in 2011.

Striplin was instrumental in establishing the Alabama Sports Hall of Fame, serving for 13 years as Chairman and a total of 23 years on the hall's board. He served as chairman of the Bryant-Jordan Student Athlete Foundation. He served on the board of directors at HealthSouth, where he was chairman of the compensation committee. He resigned from HealthSouth during the accounting scandal in 2003. He also served on the boards of Superior Bank, Kulicke & Soffa Industries (which purchased American Fine Wire), Robins & Morton Group among others. He was a trustee at University of South Alabama and at Birmingham-Southern College, where Striplin Field and Striplin Sports Center are named in his honor. He served as chairman of the Birmingham Park and Recreation Board, and was a member of the Birmingham Business Leadership Council, board member of the Alabama Sports Foundation and the American Sports Medicine Institute.

Upon his death in 2012, Striplin had four children and nine grandchildren.