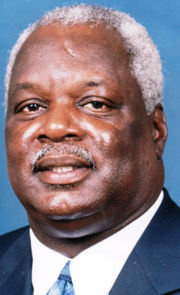 Bandy first ran for City Council in 1993, but lost to Linda Coleman, who was backed by the Jefferson County Citizens Coalition. He won the Coalition's endorsement as her challenger four years later and defeated her to join an all-new council following the 1997 election. Bandy failed to get enough votes in the 2001 election to make the runoff, which was won by Roderick Royal.

Bandy tried to win the seat back in 2005, and forced a runoff with 22% of the vote, but Royal was able to overcome the challenge to his seat. Bandy later campaigned unsuccessfully to unseat his District 9 predecessor Linda Coleman to represent House District 60 in the 2006 primary elections.

In 2009, Bandy again attempted to win back his seat from Royal. In his campaign, Bandy ran on a platform of more affordable housing and street lights. During the runoff, Bandy expressed his desire to restore power and access to the Birmingham Community Participation Program, to get overgrown lots and rights-of-way cut faster, and to promote commercial development along U.S. Highway 78 in Pratt City. Bandy once again lost the runoff to Royal.

In the 2013 Birmingham municipal election, Royal decided not to run. Bandy faced five other candidates for the position. He pledged to advocate for the city cleaning up vacant lots, reducing crime and encouraging businesses to locate in the district.