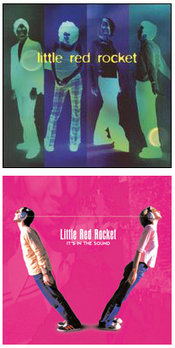 Little Red Rocket was a pop-rock band made up of Alabama School of Fine Arts students Maria Taylor (theater) and Orenda Fink (dance) along with a rotating group of instrumentalists. They started out as an acoustic duo, but quickly picked up drummer Louis Schefano and bassist Greg Nobles. After only four months as a band, the group signed to Geffen Records in 1997, but nothing materialized from the deal and they were dropped after Geffen was absorbed into Universal Music Group in 1999.

Fink and Taylor then moved to Athens, Georgia. There the two leads recruited drummer Scott Sosebee and bassist Jackie Ferguson and debuted their new lineup at a 1999 Valentine's Day show. That line-up lasted about a year, with two well-received shows at Austin's South by Southwest festival, before they split to pursue separate projects. Fink and Taylor started playing with Now It's Overhead and also started performing as the duo Azure Ray with Eric Bachmann.

Azure Ray is now based in Omaha, Nebraska and records on Omaha's Saddle Creek label. Both Taylor and Fink have also recorded solo albums and have appeared on disc as part of Saddle Creek founder Conor Oberst's project Bright Eyes.