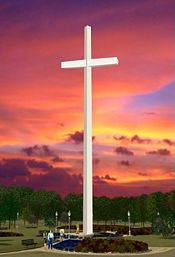 Rendering of the Majestic Cross

The "Majestic Cross" is a 100-foot-tall cross located on the campus of Hunter's Chapel Holy Church of Christ in Walker County and visible from I-22.

The idea of erecting a monumental cross came to pastor Dale Hyche when he saw a similar structure during a drive near Gatlinburg, Tennessee. He presented the plan to the church's board of deacons who approved it and began raising funds for the estimated $232,000 cost. A prayer garden and walkway are planned at the cross's base.

The cross was designed, manufactured, and installed by the Headrick Companies of Laurel, Mississippi. Construction began in February 2010 and was completed in June of that year.