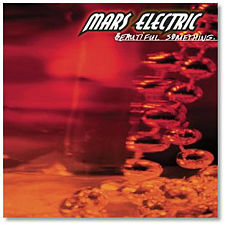 Mars Electric (originally Wish) was a rock band active in Birmingham from 1995 to 2003.

Singer Jacob Bunton formed the glam-rock group in 1995 with Chris Simmons on guitar, Carl Hopper on bass and Matt Finn on drums. Atlantic Records signed them up to a record deal in 1997. They recorded at Criteria Studios in Miami, but those tracks were never released. The band did appear at the 1998 City Stages festival.

Producer John Kalodner subsequently made them the first group signed to his revived Portrait Records label, which released their debut album Beautiful Something in 2000.

Mars Electric opened for the Stone Temple Pilots and Mötley Crüe that summer, but was dropped from the label at the end of the year. The group effectively disbanded and Bunton went on to found Lynam. An album of previously unreleased Mars Electric recordings made with producer Joey Donatello was issued in 2003 on Magnus Soderkvist's Atnezia Records in 2003. Mars Electric officially broke up soon after its release.

The track "Disco King" on the 2003 album refers to the popular "Disco Night" at Five Points Music Hall.