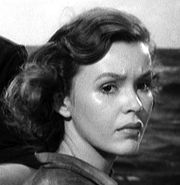 Mary Anderson (born Bebe Anderson April 3, 1920 in Birmingham) was a film and television actress from the late 1930s to the early 60s.

Anderson grew up in Birmingham, graduated from Howard College where she was active in the theater department, and was a runner-up in the Miss Birmingham pageant.

Anderson appeared in a number of films in the 1940s. In 1939, when she was sixteen, Anderson auditioned for the role of Scarlett O'Hara in "Gone With the Wind". She did not get the lead, but was cast in a supporting role. She went on to appear in numerous little-known films through the 1940s and transitioned to television during the late 40s and early 50s. Her first roles were in the reportory companies of the Chevrolet Tele-Theatre, the Philco Television Payhouse, DuPont's Cavalcade of America Theater and the Westinghouse Desilu Playhouse. She also played guest roles in "Treasury Men in Action", "Tombstone Territory" and "Perry Mason". Beginning in 1964 she took a recurring role, as Catherine Peyton Harrington, in the TV soap opera "Peyton Place".

Anderson married cimematographer Leon Shamroy in 1953. The two had met on the set of the biographical film Wilson 9 years earlier. She has often been confused with a stage actress of the same name who died in 1940. Anderson was credited under her birth name, Bebe. Her brother, James Anderson, was also an actor.