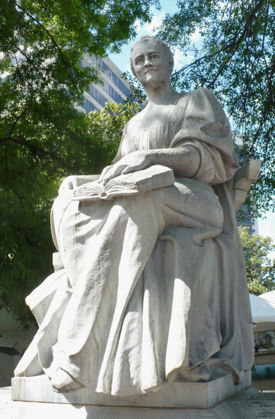 The Mary Cahalan statue is a marble monument to former Powell School teacher and principal Mary Cahalan located in the southeast quarter of Linn Park, just outside the entrance to the Linn-Henley Research Library.

When Cahalan died in 1906, there was an immediate public movement to erect a statue in her honor. Early plans included a memorial drinking fountain for East Park, located near her school. Soon, though, a portrait statue in marble was commissioned from sculptor Giuseppe Moretti.

The subject's measurements were taken after her death by Edna Smith. The statue was carved from a single block of bluish-white Talladega marble. Moretti was assisted by Geneva Mercer and the Talladega Marble Company. It was dedicated on May 1, 1908. The 5-foot-tall statue depicts Cahalan seated and reading a book. The base, also five feet tall, is inscribed "Mary A. Cahalan, Teacher" on the front, and "Erected by the People of Birmingham" on the back.

In 1917 journalist Julian Street visited Birmingham and critiqued the city's three public monuments: "One is a Confederate monument in the form of an obelisk, and the other two are statues erected in memory of Mary A. Cahalan, for many years principal of the Powell School, and of William Elias B. Davis, a distinguished surgeon. Workers in these fields are too seldom honored in this way, and the spirit which prompted the erection of these monuments is particularly creditable; sad to say, however, both effigies are wretchedly placed and are in themselves exceedingly poor things. Art is something, indeed, about which Birmingham has much to learn."

In March 1950 one of the statue's arms was removed and carried off by vandals. The Birmingham Park and Recreation Board arranged for a repair. 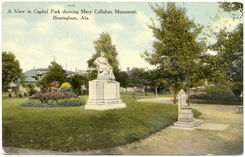 Postcard of statue in Capitol Park

On March 17, 1998 (St Patrick's Day), a plaque was installed on the base of the monument, reading: "Mary A. Cahalan, Teacher and Principal, Powell School, 1874-1906. Miss Cahalan moved to Birmingham in 1872 from Columbus, Georgia with her Irish parents and six brothers and sisters. This statue was donated by the people of Birmingham and dedicated May 1, 1908."

In 2006 the Friends of Linn Park hired sculptor Dale Chambliss to restore and conserve the statue, which was suffering from soil, frost damage, and a broken nose. A video documentary, produced by Tom MacKnight chronicled the restoration process, including in-depth backstory on Cahalan, Moretti and Alabama's marble industry written by Russell Hubbard.

The statue is featured in Jay Taylor's parody The Moretti Code.