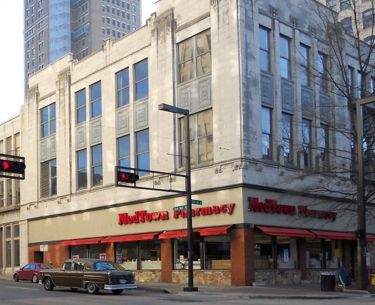 MedTown Pharmacy was a drug store located at 221 20th Street North, on the southeast corner of its intersection with 3rd Avenue North. The site had previously served as a location for Liggett's, Big B Drugs and CVS pharmacies.

MedTown Pharmacy was opened in January 2005 by Chris and Kristin Simpson, both pharmacists. A MedTown South location opened later in Pelham. The downtown location closed in December 2010, with prescriptions moved to the Harbin Pharmacy in Southside.

The Simpsons marketed the store as a "small-town pharmacy in the heart of downtown". In addition to prescription and over-the-counter medications and health and beauty supplies, the store sold Hallmark cards and gifts and pre-packaged food and beverages.