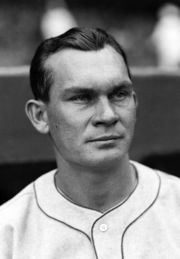 Michael Franklin "Pinky" Higgins, Jr (born May 27, 1909 in Red Oak, Texas; died March 21, 1969 in Dallas, Texas) managed the Birmingham Barons for two seasons. He played as a third baseman and worked as a manager, executive and scout in the Major Leagues, including ten years as general manager of the Boston Red Sox.

Higgins was given his nickname as a baby and grew up in the Dallas area. He graduated W. H. Adamson High School in 1926 and played football on scholarship at the University of Texas before signing with the Philadelphia Athletics after his junior season. He made his debut in the Majors on June 25, 1930 and was used sparingly in relief before spending the the 1931 and 1932 seasons with San Antonio and Dallas of the Texas League and the Portland Beavers of the Pacific Coast League. He returned to Shibe Park in 1933 to replace Jimmie Dykes as the full-time third baseman. He batted .314 that year with 13 home runs and 99 RBI. He hit for the cycle on August 3 in a 12-8 victory over the Washington Senators.

Higgins led the American League in batting average in 1933 and 1934 and had a career-high 23 home runs in 1935 despite missing the first two weeks of the season with a sprained ankle. He was traded to the Boston Red Sox in 1937 for another third baseman, Billy Werber, and continued to hit over .300 in his first two years there. He hit successfully in 12 consecutive at bats in 14 plate appearances with two walks that June, setting a Major League record which still stands, even though Walt Dropo matched his feat in 1952 without a walk.

Higgins was traded to the Detroit Tigers for pitcher Elden Auker in 1939 and played for them in the 1940 World Series. He continued to hit for power, but his average suffered in the early 1940s. Higgins entered the U. S. Navy after the 1944 season and spent the year managing the Great Lakes Naval Station team. His contract was bought during the 1946 season by the Red Sox and he returned to Fenway with a chance to play in a second World Series before he was released. Over the course of his Major League career, Higgins had 1,941 hits in 6,636 at bats for a .292 average with 140 home runs and 1,075 RBI. He was selected to the 1934, 1936 and 1944 All-Star teams.

After being cut from the field, Higgins remained with the Sox as a farm system manager. He was first assigned to the Class B Roanoke Red Sox of the Piedmont League for the 1947 season. He was promoted to the 1949 Birmingham Barons clubhouse. He spent two seasons at Rickwood Field, managing two second-place finishers in the Southern Asociation, before being offered a Major League club, the Chicago White Sox. Higgins remained loyal to Boston, however, and was promoted to the AAA Louisville Colonels of the American Association. In 1955 he returned to Fenway Park as manager of the Red Sox. His team weathered the death of Harry Agganis to finish 84-70, a 15-game improvement over the previous season, earning Higgins the United Press "Manager of the Year" title. Over the next three seasons, the Sox never finished less than 12 games behind the Yankees, despite All-Star Ted Williams' batting titles. Higgins was replaced by Billy Jurges as manager on July 3, 1959, but remained on the payroll as assistant to owner Tom Yawkey.

Higgins loyalty paid off with another stint as field manager in 1960. In 1961 he was given the added responsibility of controlling player personnel and trades. In 1962 he stepped down from field managing to focus on front office duties. His Red Sox teams earned a record of 560-556 (.502) with 3rd place finishes in 1957 and 1958. He was known as an easygoing, likable manager who felt it prudent not to intervene with his pitchers on the mound.

As a personnel manager, Higgins also exercised a light hand. His first major trade deals were executed in his third season as general manager and he could boast of no great successes. He clashed with Johnny Pesky, his successor on the field, and pushed to replace him with Billy Herman in 1964. Lack of quality pitching led the 1965 team to amass more than 100 losses. Even though Dave Morehead, a 21-year-old prospect, threw a no-hitter for the Sox on September 16, Yawkey picked that day to let Higgins go. Higgins' lifelong friend Paul Richards subsequently hired him to scout for the Houston Astros.

Due largely to after-the-fact reporting of racist language, Higgins has been held at fault for the slow integration of the Red Sox roster. No direct allegations were made during his life and he did manage black players on the field and acquired black players as general manager. While considered a friend of the players in his early managing career, players for his later teams, both black and white, found him cool and stand-offish.

In February 1968 Higgins was driving under the influence of alcohol on a Louisiana highway and caused a collision which killed one highway worker and injured two others. He pleaded guilty and suffered two heart attacks before he was sentenced, to four years at Angola State Prison. He earned parole after only two months, but died the next day from a heart attack. He was survived by his wife, Hazen, two daughters, and two grandchildren.