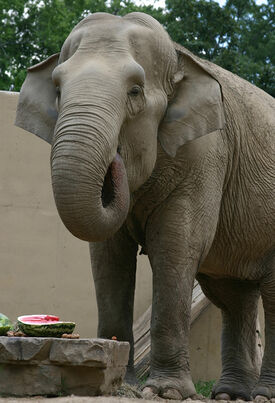 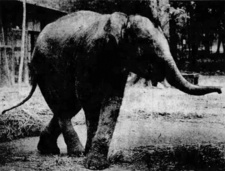 Newspaper photograph of Mona in 1955

The then unnamed elephant was captured in the wild in 1951 and housed at an animal and bird farm Miami for about two years before debuting in Birmingham on July 4, 1955, the year the Zoo reopened at Lane Park. Her arrival was speculative, as the $3,750 price tag for her purchase had not been agreed. On September 28, zoo board president James Head announced that the decision had been made to complete the purchase and add her to the zoo's permanent collection. Mayor Jimmy Morgan subsequently began planning to adapt Lane Park's existing concession stand for use as an "elephant house," promising that it would be among the finest in the country, allowing multiple elephants to "move around without being chained" and to have access to a heated enclosure during periods of cold weather.

In 1957 another female elephant, Susie joined her in the exhibit. The pair inhabited a 1,000-square-foot pen with access to two concrete-floored stalls in the zoo's pachyderm building. The effect of concrete floors on captive elephants has been shown to be detrimental, and as they aged, both elephants' feet required frequent special care. Although the outdoor enclosure was dirt-floored, the surface had been packed hard by their continual pacing.

In 1960 she and Mona began learning various tricks from trainer C. P. Pinyan and keeper Jerry Brasher. Their routine provided exercise and mental stimulus, and helped to break up the long day.

While sharing the exhibit the younger Susie took over the dominant role, taking possession of toys and other features added to the exhibit. As zoo staff became more aware of the importance of enrichment activities, Mona was given her share of opportunities. She enjoyed painting and playing "music" with chimes. Her normal routines were highlighted by special treats of marshmallow Peeps, Altoids and peanuts used as rewards in training. She was also given a large watermelon cake and several toys each year on July 7, which was observed as her birthday and celebrated with a party for zoo visitors. On January 31, 2005 Susie died at the zoo at age 55.

Mona's solitary life on exhibit quickly became the focus of a controversy over elephant welfare. While keepers reported that her personality "bloomed" after Susie's death, a number of groups criticized the zoo for keeping a solitary elephant in the small enclosure.

"The Elephant Sanctuary" offered in 2006 to relocate Mona without charge to their 2,700-acre facility near Hohenwald, Tennessee where she would have a greater range of natural habitat to explore and the companionship of other elephants. Alabama Wildlife Advocates actively lobbied for this move. Activists created on online petition and demonstrated outside the zoo during her annual birthday celebration.

Zoo director William Foster argued, however, that Mona was receiving the best possible medical care. He warned that the stress caused by travel and resettlement would not be healthy for Mona, and that she should not, at her age, be subjected to the behavior and pecking order of an unfamiliar herd. He also indicated that plans were underway to improve her habitat and potentially add a companion to her exhibit.

On June 18, 2007 zoo staff found Mona unable to stand on her own and assisted her with a crane. It was surmised that one of her legs had become numb from her lying on it. She was placed on 24-hour watch and appeared to be in good health and spirits following the incident. Nevertheless, two days later she was again found on her side, and indicated that she was unwilling to get to her feet, even with assistance. Zoo veterinarian Marie Rush conferred with other staffers and the decision was made to euthanize. She was pronounced dead at 10:30 AM on June 21, 2007, with a necropsy set to begin the same afternoon.

Mona will be buried in an unmarked grave on zoo grounds. Memorials gifts will be donated to the International Elephant Foundation. Without giving specifics, zoo officials indicated later in July that a new, larger elephant exhibit was being planned.