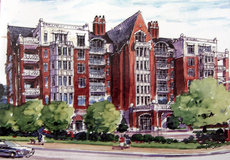 Rendering of the Montelena proposal

Montelena was a proposed $40 million, 7-story condominium development to be located at 400 Hollywood Boulevard, a 1-acre site owned by the Mazer family in Birmingham near Mountain Brook Village, the former site of PT's Sports Grill, Mexico Lindo restaurant, and the Coffee Shoppe.

The 49-unit project was planned by Inkana Development, represented by Slade Blackwell with Williams-Blackstock Architects creating the design. Inkana was partnering with Mazer in the development. It was originally proposed as a 57-unit, 11-story tower, but scaled back to 7 stories. Each unit would have had two-bedrooms and two baths, starting at 1,500 square feet and ranging in price from $550,000 to $1.3 million, with the largest penthouse going for $2 million.

B. L. Harbert International was set to begin construction in October 2006, but sales were disappointing and plans were put on hold. In January 2007 Inkana took down their signs and relocated their sales office from the site. Those who put contracts on condominium units were released, and the Mazer family sold the property to Shannon-Waltchack Investment Real Estate in September 2009.