From Bhamwiki
(Redirected from Mud Town)
Jump to: navigation, search 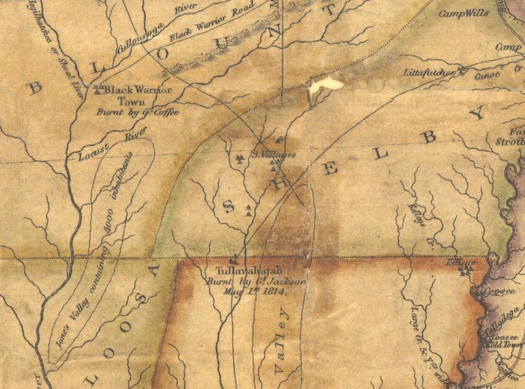 Mad Town (also called Mud Town, Mudd Town, or Old Mudtown or, in transliteration of its Muscogean name, Talooehajah, Tulawahajah,Tullavahajah, Tallafohatcho or Tulauhabsho) was a settlement used by Indian traders on the banks of the Cahaba River in present day Shelby County. The name is likely derived from what would be rendered on modern Creek as "Tvlofv Haco" (IPA / tɑ ló fɑ hɑː t͡ʃo / ). "Tvlofv" refers to a built settlement, and "Haco" describes someone with a reckless courage and selflessness, often used as a male name. The settlement may have originally been built by someone with that name.

The town was located about three miles below the confluence of the Little Cahaba, near where Old Caldwell Mill Road crossed the river. The site was later developed as part of the golf course of the Altadena Valley Country Club, although some sources disagree about the location, and even whether the settlement was on the east or west bank of the river. Some place the town much closer to the outlet of the Little Cahaba.

In any case, the town was founded as a northern outpost of the Upper Creek tribes, used by traders and serving as an important landmark on the Bear Meat Cabin Road or "Great Tennessee Trail" from Ditto's Landing on the Tennessee to Old Town on the Warrior River that later became the Huntsville Pike. According to researchers for the WPA's Writers' Program, the town marked the junction of the East-West Trail from the Carolinas to Mississippi and the Great Trade Path connecting the Great Lakes to the Gulf of Mexico.

During the Creek Indian War the town was cleared out and burned by General Thomas Johnson on May 1, 1814, by order of General Andrew Jackson. Johnson reported burning seventeen houses at the site before moving on to Canoe Creek. One veteran of that war, Joseph Roy, became an early settler in Shelby County, and is said to have erected his cabin on the bank opposite Mad Town a few years after it was burned. Virginia Duffy remembered the Mad Town site as still being used by a dwindling band of Indian "vagabond traders" at the end of the decade. It appeared on an 1825 map as "Ruins of Mad T."