The Story of Coal and Iron in Alabama 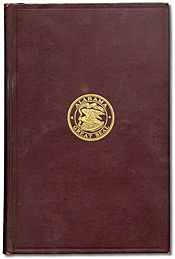 The Story of Coal and Iron in Alabama is a 1910 history written by Ethel Armes comprehensively detailing the rise of the Birmingham District as an industrial region and of Birmingham as its commercial center.

While published, begrudgingly, under the auspices of the Birmingham Chamber of Commerce, the initiative for the project was begun by Armes shortly after she arrived in the city as a Birmingham Age-Herald reporter in 1905. In 1907 then-Chamber president Robert Jemison Jr encouraged her and formed a committee, chaired by Truman Aldrich, to support Armes' research. That connection gave her access to corporate offices as well as mines, factories and industrial plants. The project was undertaken while many of the pioneers of industrial development were still active, and Armes took advantage of the opportunity to conduct extensive interviews and examine sites first hand. She also uncovered numerous previously-unknown and now lost documentary sources.

She used her skills as a journalist to craft a riveting narrative from her source material, earning effusive praise from the local press and solid reviews from national critics. She displayed unexpected objectivity for a work whose commercial niche was alongside heavy volumes of unbridled boosterism. Her critics have acknowledged her ability to bring a wide array of primary sources to bear, but question her omission of unpleasant conflicts such as the suppression of organized labor or the employment of leased convicts. Furthermore, while she took pains to paint realistic portraits of the tycoons which are the central characters of the book, her failure to look beyond those heroic personalities and make more of the contributions of the nameless has been another source of critical complaint. She compensated for some of those omissions in an incisive article in The Survey of January 6, 1912 and in her address to the United Mine Workers in 1913.

The 581-page tome was illustrated with numerous photographic and lithographic plates. After Jemison's term as president ended, there was less support for the publication in the Chamber. Secretary Joseph Babb argued against the project and funds which had been promised to support Armes' work were reduced. Frank Nelson Jr supported the work, however, and it was eventually published "under the auspices of" the group.

That first, leather-bound edition, printed at the University Press in Cambridge Massachusetts, was abundant enough that Armes was still seeking help in getting the work into bookstores in 1921. Bookseller Patrick Cather has argued that first editions are not as scarce as they are often made out to be—a notion perpetuated by unattributed urban legends about masses of them consigned to fire or carted to landfills.

Facsimile reprint editions were published in 1972 by the Book Keeper's Press and in 1987 by Leeds's Beechwood Books imprint.