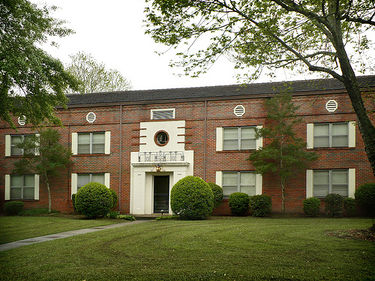 The mainly two-story red brick apartment buildings were Georgian in form, but Art-Deco in their details, with limestone entryways ornamented with circular windows, wrought iron and brick bands.

The complex, which was completed in 1948, consisted of approximately 21 one- and two-story buildings, including 96 one-bedroom units, 168 two-bedroom units, and 12 bungalow apartments. Residents were allowed to plant gardens and construct patios within the complex, except for the front, facing Lane Park Road. As a result, fountains, sculpture, bird feeders, wind chimes and flowers were found throughout. The property is owned by Evson, Inc. and was last managed by Joy Ellis.

The Park Lane Apartments were occasionally subject to flooding from nearby Watkins Brook. On June 14, 1999, a storm in the area dropped 4.5 inches of rain in 2 hours. This caused over two feet of interior flooding, damaging 72 units and costing $450,000 to repair. To mitigate future flooding, the city of Mountain Brook implemented the Watkins Brook Flood Hazard Mitigation Project.

In 2009 Evson, Inc. executives Rele Evans and his son John revealed plans for a $200 million redevelopment of a 27-acre parcel including the apartments and adjacent shopping center. The new development, dubbed "Lane Parke" would be built in phases with a total of 210,000 square feet of retail space, 1,200 parking spaces, a 75-room hotel and 45,000 square feet of office space above the shops. Condominiums, town houses and apartments would also be constructed in the final phase. Demolition of the apartments to make way for Lane Parke took place in 2013.