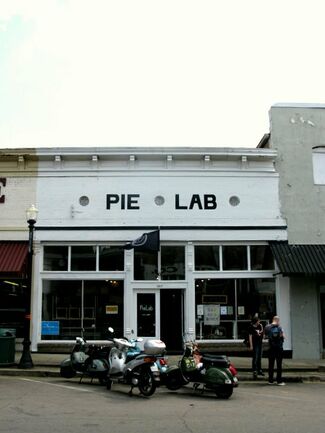 PieLab was a pastry shop and community meeting place in Greensboro, Hale County. It was opened in Summer 2009 as part of the community-building efforts of "Project M", a humanitarian group based in San Francisco with an emphasis on design which was inspired, in part, by Auburn University's Rural Studio.

Project M funded a project to improve Greensboro residents' access to treated municipal water. They celebrated the culmination of that project with a "Free Pie" party. They were impressed with the way neighbors stayed and socialized at the party and made plans for a more permanent meeting space. A vacant home on Whelan Street served as temporary quarters until November, when renovations to their present location in a former drug store at 1317 Main Street were completed. The project made use of donated and recycled materials and volunteer labor.

PieLab pays for operating costs through the sale of food and drinks. Its staff are paid by grants or through AmeriCorps' VISTA program. In addition to preparing pies and other foods, they coordinate local projects and provide design assistance to local groups.

PieLab was named a finalist for a James Beard Foundation award for "best restaurant design or renovation in North America" in 2010.