Profile of a Young Woman 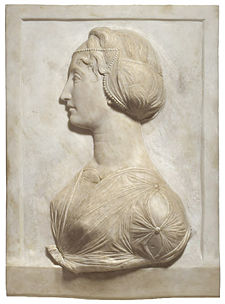 Profile of a Young Woman or Profile of a Gentlewoman is the name given to a portrait bas-relief bust carved in the 1450s by Mino da Fiesole and part of the European Art Collection of the Birmingham Museum of Art.

Mino di Giovanni, called da Fiesole (1431–1484) was a Tuscan artist associated with the studio of Desiderio da Settignano, who has been described as his master, though the two were approximately the same age. Unlike Desiderio, Mino only rarely depicted women in his work. His name refers to the town of Fiesole, situated on a hillside above the city of Firenze (Florence) in the Arno valley.

The 21 5/8" x 15 3/4" marble sculpture depicts a young woman, facing left with her torso turned slightly toward the front. She is dressed in a classically-detailed sheer gown knotted at the breast and fastened with round buttons at the shoulder and upper arm. Her hair is gathered in a veil and tied in a ribbon. Though it is an early work, the relief abounds in the fineness of detail and expressive spirit which marked Mino's oeuvre. The classical style of dress corresponds to his close study of Roman antiquities during that period.

The purchase was made by the Museum in 2010 with funds provided by a $1 million bequest from the estate of Nina Miglionico, a long-time Birmingham City Council member and patron of the arts. It had previously been in the collection of banker Emile Gaillard of Paris. The outer frame of the panel has been restored.