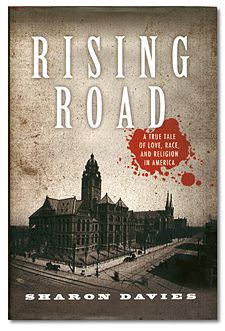 Rising Road: A True Tale of Love, Race, and Religion in America is a 2009 history by Ohio State University law professor and author Sharon Davies which details the 1921 murder of James Coyle, pastor of St Paul's Catholic Church in Birmingham. He was shot on the porch of his rectory by Edwin Stephenson, a Methodist minister whose daughter, Ruth had been married to Puerto Rican-born laborer Pedro Gussman by Coyle hours earlier.

The book centers on the Grand Jury and trial proceedings against Stephenson, for which Davies was able to make use of official transcripts, adding her own knowledge of criminal prosecution to the contemporary reporting by the Birmingham News, Birmingham Post, and Birmingham Age-Herald as well as the national press.

Ultimately, Stephenson, defended by a team of lawyers headed by Hugo Black and paid with funds raised by the True Americans and the Ku Klux Klan, was acquitted by an all-white jury. Davies extends her analysis of the social and legal context of 1920s Birmingham to the history of inter-racial marriage, anti-Catholicism, and women's rights in the United States.