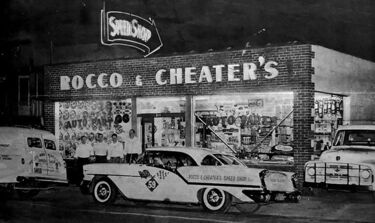 Rocco & Cheater's Speed Shop was a hot-rod shop located at 300 1st Avenue North in Birmingham. It first opened as a repair shop in 1944 by brothers Rocco and Cheater Sanfilippo. The business was incorporated in 1946 and quickly became a magnet for owners looking to soup up their cars for drag and circle track racing. Another younger brother, Dominic, joined the business in 1954.

Domenic's son, Sam took it over in the 1970s and eventually brought his son, Anthony into the business. They closed in 2007, although the stock remains in storage and is occasionally opened up by appointment. A segment of The History Channel show "American Pickers" was filmed there, for an episode that first aired on June 4, 2014.