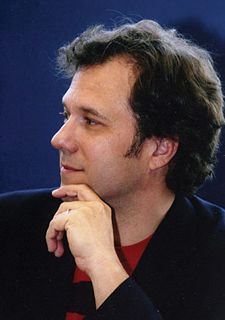 Scott Stantis (born May 2, 1960 in San Diego, California) is the staff editorial cartoonist for the Chicago Tribune. He was the editorial page cartoonist for The Birmingham News from September 1996 until August 2009. His editorial cartoons appear weekly in USA Today and he has also created two nationally-syndicated comic strips, The Buckets, and "Prickly City". He is a member of the Tribunes editorial board and occasionally contributes guest editorial columns.

Born in San Diego, Stantis grew up in Madison, Wisconsin where he graduated high school. He and his family returned to the West Coast and Stantis enrolled in Los Angeles Community College, and later at California State University, Long Beach, which he left before graduating.

His first professional cartooning job was with the Orange County Register in Santa Ana, California. He was later hired by the Memphis Commercial Appeal in Tennesse, the Arizona Republic in Phoenix, and the Grand Rapids Press in Michigan before coming to Birmingham. His first comic strip was called "Sydney", which lasted only a short time. He created "The Buckets" in 1991 while in Memphis, turning that strip over to Greg Cravens in 2004 when he launched "Prickly City", a conservative "rebuttal" to strips like "Doonsbury" and "The Boondocks".

Though intended as a "sweet" character-based strip, "Prickly City" has created some controversy for its political stance. The Chicago Tribune and Seattle Times dropped it for misquoting Ted Kennedy and making jokes about Terri Schiavo. It has also inspired a daily weblog that deconstructs the strip in terms of current GOP "talking points".

The first controversy for "Prickly City", however, was its displacement of "Mary Worth" on the News funny pages. Fans succeeded in getting Worth reinstated and "Prickly City" moved to the editorial page.

Stantis has served a term as president of the Association of American Editorial Cartoonists and still serves that group's Herblock Fund as chair of industry outreach. Stantis and his wife, Janien Fadich-Stantis, resided in Hoover with their two sons, a box turtle, and Dogzilla the dog.

Stantis, who had long been mentioned as a potential candidate for staff cartoonist at the Chicago Tribune, accepted the job beginning August 30, 2009.