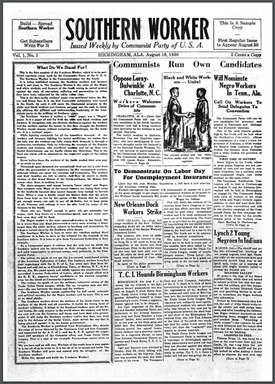 Front page of the first edition of the Southern Worker.

The Southern Worker was a weekly newspaper published from 1930 to 1937 by the Communist Party USA. Its content was datelined from Birmingham, but because the district was so tightly controlled by industry interests, the paper was actually produced in Chattanooga, Tennessee and printed by a shop in Rossville, Georgia. The mailing address was changed from Birmingham to Chattanooga in February 1931 due to police surveillance at the Birmingham Post Office.

Sol Auerbach, an editor for the Labor Defender was appointed by the national party to oversee publication. He and his wife Isabelle wrote, edited and created layouts from their rented rooms, moving often. Auerbach used the pen name "Jim Allen" for his bylines, and conducted business under other assumed names, often using "James Bigelow". Isabelle wrote under the name "Helen Marcy", and managed correspondence for the paper. The Auerbachs were given a budget of $200 to start the weekly. Additional support came from the International Workers Order and from subscription sales. The paper was distributed by members of the party's affiliated organizations in Birmingham, Chattanooga, Atlanta, New Orleans, Houston and Galveston; as well the textile towns of Tennessee, North Carolina, and Virginia; and in the coal mining region of Kentucky. The first issue, priced at 2 cents, was dated August 16, 1930.

During its initial run, the Southern Worker focused on tenant farming and sharecropping practices in the rural South as part of the Party's campaign to organize the "oppressed nation" of Southern blacks to overthrow their oppressors. The Auerbachs researched the political history of Reconstruction with assistance from Huntingdon College dean Olive Stone. They also reprinted reports from the regional press and letters from readers. The launch of the Western Worker in 1932 was inspired by the publication's successes.

Auerbach moved to New York City after the September 5, 1931 was published, and editorial duties fell to Harry Wicks, who managed only another month before finances forced the paper into hiatus. Elizabeth Lawson took over briefly, and then helped organize a re-launch of the Southern Worker as a monthly magazine on May 20, 1933, using the name "Jim Mallory" on the masthead. That schedule was maintained until through a format changed in late 1936 until the project was dropped in September 1937.

The newspaper never gained a large local readership, but was distributed and shared widely among party sympathizers, helping expose particularly cruel practices to outside observers. It folded in 1937 and was succeeded by New South, which was published in Birmingham and Chattanooga, Tennessee.