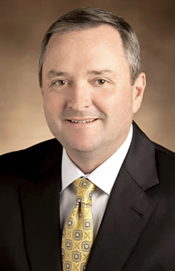 Hewett's father, an explosives expert, moved the family to Birmingham in 1971. Hewett graduated from Berry High School in Hoover and earned a bachelor of science in corporate finance at the University of Alabama. He went on to complete a master's in business administration at UAB and a professional degree from the Stonier Graduate School of Banking at the University of Delaware.

Hewett joined AmSouth Bank in 1982 and worked there for fourteen years. He developed a lending program for hospitals which helped AmSouth assume a major role in that sector. In July 1996 he was hired as vice president and chief financial officer for the Quorum Health Group in Nashville, Tennessee. In 1999 he co-founded EBM Solutions, a web-based marketer of clinical treatment guidelines for medical professionals. He left in 2001 and worked as an independent consultant for a year before returning to Birmingham, where he helped found Ahead Development LLC, a developer specializing in health care facilities. In 2010 he was hired as a senior vice president with The Sanders Trust, which develops and manages health-care properties.