From Bhamwiki
(Redirected from Strand Theatre)
Jump to: navigation, search 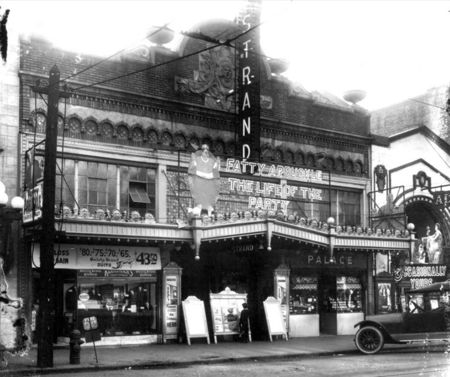 The Strand was built on the site of the former Steele-Smith Dry Goods Company store, which had been destroyed by fire a year before. The 50-foot wide building combined two storefront lots. Abernathy erected thick concrete walls between the side aisles and auditorium on each side. The walls were spanned by large steel beams, eliminating any columns to obstruct views. Narrow rows of mezzanine-level seats were cantilevered from the side walls and a balcony spanned the rear of the room.

The exterior was grander than most contemporary theaters. Its Italian Renaissance styling followed the precedent of New York's Strand Theatre, which opened on Broadway the previous year. The brick facade featured a central bas-relief and prominent urns on its shaped parapet, supported on a projecting cornice supported on a row of brackets forming an arcaded frieze. Below was a mosaic tile panel with the name of the theater, flanked by windows. On the ground floor the central recessed entrance had retail tenants to either side. A tall vertical neon sign was installed above the ornate marquee, studded with lights.

When the theater opened on September 30, 1915, it was operated by S. A. Lynch Enterprises of Asheville, North Carolina as part of one of the first large cinema chains, a regional distributor for W. W. Hodkinson's Paramount Pictures. The owners also expected to exhibit pictures from Triangle and D. W. Griffith. By 1916 the theater was advertising Paramount and Triangle films along with daily organ concerts and Broadway shows (priced at 10 and 20 cents). Rienzi Thomas was hired to conduct its 8-piece house orchestra and George Hamrick served as the organist until 1919.

The Strand survived the break-up of the Triangle Film Corporation, in which Lynch had become a partner. It prospered as Birmingham's finest silent movie house as Lynch solidified his distribution empire under the Southern Enterprises banner before selling out to Paramount in 1922. Several silent film stars, including Francis X. Bushman, Douglas McClean and Walter Hiers, made appearances at the theater. A larger stage was hastily constructed for an in-person appearance by Clara Kimball Young. The 1926 feature Men of Steel, filmed in Ensley, showed at the Strand following its world premiere at Ensley's Franklin Theatre. The Strand also hosted a revival of D. W. Griffith's The Birth of a Nation.

Kennedy later oversaw the introduction of "talkies". The first of those, The Jazz Singer with Al Jolson, had its Birmingham premiere at the Strand on May 4, 1928 and ran for 13 weeks. The late 1927 opening of the much larger and more sumptuous Alabama Theatre cost the Strand its pre-eminence as Paramount's first-run screen. Meanwhile, the Great Depression cut deeply into returns and the combined chain filed for bankruptcy in 1935. The Strand's best run in the two-year period beginning in October 1934 was "In Old Kentucky", which took in $4,250 in its 1 1/2 weeks.

In 1948 Newman Waters converted a neighboring theater, the Capitol into a second-run theater call the "Newmar". When it closed a few years later, the Strand took over the name. The Newmar name was removed and the Strand reopened as part of the Acme Theater chain on September 30, 1959 (44 years to the day after it first opened) with a first-run showing of Walt Disney's Darby O'Gill and the Little People.

The theater, then managed by Henry Hury, closed on November 28, 1962 after a showing of Roger Corman's Tower of London starring Vincent Price. The building was purchased by Birmingham Trust National Bank, which demolished it in August 1963 to make room for a new parking deck for its 20th Street office.