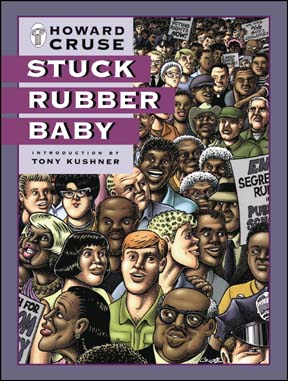 Stuck Rubber Baby is a graphic novel by Howard Cruse which relates the experiences of a young homosexual white male during the Civil Rights Movement in Birmingham in the 1960s. Though fictional, the story draws from Cruse's own experiences. It is told in 210 pages of densely-inked cartoon panels and took five years to produce. It was published by Paradox Press, an imprint of DC Comics in 1995. A paperback edition was issued by HarperCollins a year later.

Stuck Rubber Baby was nominated for the Lesbian and Gay Book Award from the American Library Association and for the Lambda Literary Award. It was honored as the "Best Graphic Novel" by the UK Comic Art Awards and a French translation of the work by Jean-Paul Jennequin won the Prix de la critique from the Association des Critiques et des journalistes de Bande Dessinée in 2002.