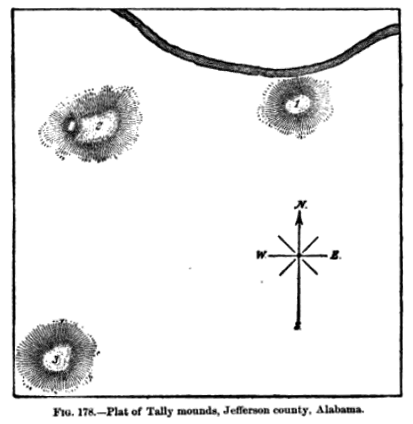 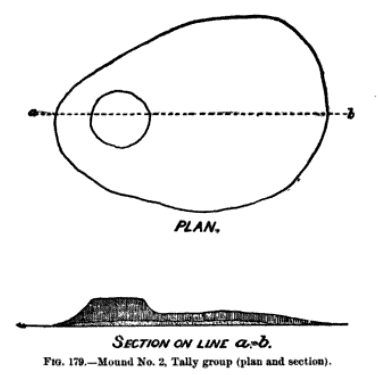 The Talley mounds (also known as the Tally mounds, Bessemer mounds or Jonesboro mounds) were a group of prehistoric Indian mounds on the bank of Valley Creek close to the site which was settled as Jonesboro in 1813. Though the site may have been inhabited by paleo or Woodland Indians as early as 5,000 years ago, the mounds themselves are believed to have been constructed about 1100 AD (or about 400 years before the Moundville mounds in Hale County) by Mississippian tribes. The site is thought to have held a village of up to 1,000 inhabitants.

The long-abandoned site was used as a camping place in the era of European settlement and later became part of the property of N. D. Talley, farmed by sharecroppers. Ethnologist James Middleton prepared a descriptive report in 1890-91 which was published in 1894:

Near Jonesboro is a small group of mounds on the plantation of Mr. N. D. Talley, Sec. 8, T. 19 S, R. 4 W., of the Huntsville meridian. The valley of the small creek that flows along the northern and eastern sides of the field in which the group is located is quite wide at this point, the round, knob-like hills which form its boundary standing at quite a distance from the mounds.

The surface of the field immediately around the mounds is comparatively flat, pitching in a steep bank to the water, a few feet north of mound No. 1. Northeast of this mound the surface has the appearance of having been dug or more probably washed out by the creek. East of mound 3 is what might be called the first bottom land, about 4 feet lower than the surface of the field. This point is above the overflow of the small creek, while further down the valley the land is frequently inundated and had been under water a short time previous to examination.

A plat of the group is given in Fig. 178. No. 1, is an oblong mound, measuring 30 feet east and west, and about 4 feet high at the highest point. A few small pine and hackberry trees have grown on the sides since it was built. It is made of the same red, sandy soil as that found in the field on which it stands. Only a few coals and a shovelful of ashes were found in it, which had probably been thrown there at the time it was built and may have been scraped up from the surface of the field with the rest of the material for the mound, but in hunting the field over for any specimen that might have been washed out or plowed up no ash beds were seen, nor did any of the tenants of the land remember plowing through such beds.

No. 2 has the appearance of an oval platform with a small mound on one end of it. The longer diameter of the base of the platform is about 140 feet, the greatest width 100 feet, and the height 5 feet. The height of the upper mound, which is on the smaller end of the platform, is 7 feet, the diameter of the flattened top 30 feet. Its western slope is continuous with that of the platform. The figure shows the ground plan and the section through a b. The upper mound has been considerably torn up by treasure hunters, but scattered over the top was a large quantity of burnt clay, much of which bore the impression of a stamp made apparently of split cane. A trench length-wise through the platform showed that the top layer consisted of 4 feet of red, sandy soil, evidently taken from the surface of the surrounding field; the remainder, to the original surface of the ground, of pure river sand. The upper mound was composed of sandy soil down to the platform, and hence it is reasonable to conclude that it was built at the same time the upper layer was placed on the platform. No bones, ashes, charcoal, or vestiges of art were observed in any part.

No. 3 is a circular mound, about 110 feet in diameter at the base and 60 feet across the top, which is flat; height 8 feet. A trench across it through the center showed that it was constructed of sandy soil from the surrounding field. In the central portion, about half way down, was a layer of clear river sand 3 inches thick and about 5 feet in diameter. Nothing else was found in it. 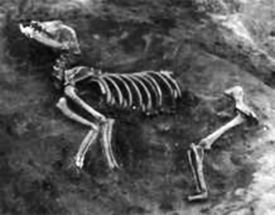 The mounds were fully excavated by David DeJarnette of the University of Alabama's Alabama Museum of Natural History and laborers working under a New Deal program in 1934-1935. Their work, which resulted in the destruction of the mounds, uncovered the remains of a young female in the "ceremonial mound", evidently placed there during its construction. Below the stone base of the mound was found evidence of the earlier village, with post holes revealing several rectangular structures and three additional burial sites, in one of which was interred a dog.

More imprints of structures, some circular, were found below the "domiciliary mound", which appeared to have been constructed in six stages with a ramp of shallow steps leading to the top. The "burial mound" contained a total of twenty-three burials, three in the first stage of construction and twenty in a later addition. Only one skull was found among those burials.

Since those excavations much of the former village site has been developed. The Jefferson County Sewer and Garbage Disposal Plant off of Johns Road, the Alabama Splash Adventure amusement park, WaterMark Place, and Visionland Parkway all cover parts of the former settlement.

In 2014 Alabama Secretary of State Jim Bennett requested that the Jefferson County Commission, which owns 69 acres of undeveloped land on the site, designate the property as a special historic district to preserve it for future enhancement as an educational attraction.