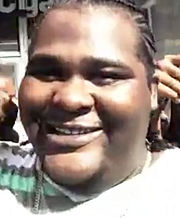 Thomas was raised by his grandmother, Mary, on Avenue U in Pratt City. He attended Jackson-Olin High School and was the father of a baby girl.

Thomas was shot to death on the porch of a home at 556 Avenue V. A suspect turned himself in to police, but has not been formally charged. Two vigils were held in his memory shortly after his murder.