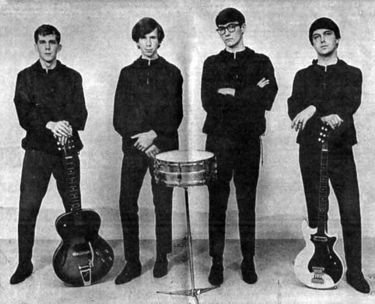 The Distortions were a rock and roll band which formed in Ensley Highlands in the early 1960s. Members and Woodlawn High School classmates Robert Alexander, Ned Bibb and Bobby Marlin rehearsed in Alexander's basement as early as 1962, performing as The Counts. Henry Lovoy joined as a lead singer that spring and accompanied them through a busy summer of nightclub gigs.

In 1965, after Lovoy's departure the Counts began working as a backing band for singer Travis Wammack, taking their name from his record "Distortion, Part 1". Zack Zackery joined the group on keyboards and they released three 45 singles on Sea Records, including "Can You Tell" penned by Bibb as well as covers of "Hound Dog" and Howlin' Wolf's "Smokestack Lightning".

During 1966 guitarist Eddie Rice joined the group. Their next two singles were released on the Malcolm Z. Dirge label, with "Behind My Wall" picking up a national distribution deal with Smash Records. That same year they released a cover of the Canebreak Singers' "I Don't Really Like You" on Casino Records. Later their Malcolm Z. Dirge release "Let's Spend Some Time Together" was picked up by Capitol Records.