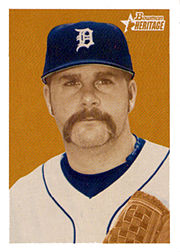 Todd Barton Jones (born April 24, 1968 in in Marietta, Georgia) is a former 16-year relief pitcher in Major League Baseball, most notably for the Detroit Tigers from 1997 to 2001 and from 2006 until his retirement at the end of the 2008 season. An effective middle-reliever, Jones had an up-and-down history as a closer. Nevertheless, he compiled 319 career saves to place him at 14th on baseball's all-time list. His 285 saves for the Tigers are a team record.

On September 16, 2007, Jones became the 21st member of the 300-save club, tying Bruce Sutter. His nickname, "Rollercoaster," given to him by Tigers Hall of Fame radio announcer Ernie Harwell, comes from his penchant for putting lots of runners on base with the game on the line yet still managing to get the save — an emotional "rollercoaster" for those watching the game.

Jones graduated from Osborne High School in Marietta, Georgia and attended Jacksonville State University. He was drafted by the Houston Astros in the first round of 1989 MLB draft and made his major league debut during the 1993 season.

Initially used mainly as a setup man, Jones soon became a closer for the Astros. His best years came with the Detroit Tigers from 1997-2001, when he logged 142 saves. On September 27, 1999, Jones threw the last official pitch at Tiger Stadium, striking out Carlos Beltran as the Tigers defeated the Kansas City Royals 8-2.

While playing for the Colorado Rockies in April 2003, Jones made remarks criticized as anti-gay comments during a discussion of the play Take Me Out. Jones publicly apologized, but did not retract his comments.

Jones signed a one-year contract with the Florida Marlins during the 2004 offseason. After an injury to incumbent closer Guillermo Mota, Jones took on the role for the first time since being traded to the Minnesota Twins in 2001. He finished the 2005 season with a 2.10 ERA and 40 saves. On December 8, 2005, Jones signed a two-year contract to return to the Tigers. In 2006, he also participated in the inaugural World Baseball Classic.

Jones was a finesse pitcher and showed good durability. In every year since the strike-shortened 1994 season, he pitched in at least 51 games. On May 21, 2006, he became the Detroit Tigers' all-time leader in saves, passing Mike Henneman.

Jones' 2008 season was limited by a torn labrum in his pitching arm.

Jones is a devout Christian, and is known for using Contemporary Christian music when entering from the bullpen. During the 2006 playoffs he entered to "Last One Standing" by MercyMe.

Jones has been a regular baseball columnist for the Birmingham News since the 1990s. Since 2002, he wrote a weekly column, "The Closer," for The Sporting News and Jones was on the cover of the baseball preview issue with the caption "Don't Tell columnist Todd Jones but (Beware of The Tigers)".

Jones currently resides in Pell City with his wife and two children, Alexander and Abigail. He owns a sports memorabilia store in Pell City.