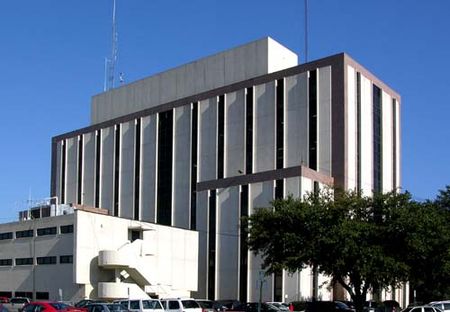 The Tuscaloosa County Courthouse is the seat of government for Tuscaloosa County, located at 714 Greensboro Avenue in downtown Tuscaloosa. The seven-story structure was officially dedicated on April 12, 1964. The design was commissioned by the county from the Birmingham firm of Charles McCauley & Associates. The general contractor for the project was the Daniel Construction Company, also of Birmingham. The steel framed building is clad with quartz and limestone in a streamlined early modernist style.

The process for the construction of a new courthouse began in 1955 when voters approved a bond measure to construct a $2.5 million courthouse and jail on the site occupied by the 1908 courthouse. By the early 1960s, all of the necessary land for its construction had been acquired. The original design for the structure called for only five floors. However, an additional two floors were added to the project, but left unfinished. This was done to allow for future expansion without major construction. During its construction, the former McLester Hotel served as the temporary county courthouse.

The courthouse was officially dedicated on April 12, 1964, to much fanfare. Governor George Wallace delivered the principal dedication address. At the time of its completion, the courthouse featured four major courtrooms, a law library and space for all county agencies with the exception of the County Board of Education.