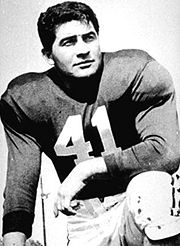 Mancha was the son of a Spanish immigrant. His family moved from Georgia to Birmingham when he was six. He graduated from Ramsay High School, where he was an All-State and All-South selection. Unable to enlist due to a childhood eye injury, he took a job in the city. When the University of Alabama resumed its football program in 1944, he was recruited by head coach Frank W. Thomas, awarded a scholarship, and given the job of starting center as a freshman.

Mancha played three years under Thomas, then played his senior season for Red Drew. During his four years as a center and middle linebacker, the Crimson Tide went 30-9-2. As a freshman star, he played all sixty minutes of the 1945 Sugar Bowl. During his sophomore season, the 1945 squad went 10-0 and beat Southern Cal in the Rose Bowl.

After graduating in 1948, Mancha was picked fifth overall by the NFL's Boston Yanks. During his two seasons there he failed to compile a statistic, and was released after suffering a knee injury. In 1949 he was hired as head coach at Livingston State University. In 1952 he was hired as an assistant under Tom Nugent at Florida State University, where he earned a master's degree. While there he coached Seminoles stars Burt Reynolds and Lee Corso.

Mancha took leave from Florida State to coach and pursue a doctorate in education at Columbia University in New York. After receiving his diploma, he returned to Tallahassee as director of athletics. Over his twelve-year tenure as AD, he hired head coach Bill Peterson and assistants Bobby Bowden, Bill Parcells, and Joe Gibbs. He left the athletics department to teach education classes. He retired as a professor emeritus of media education.

Mancha was inducted into the College Football Hall of Fame in 1990, and into Alabama Sports Hall of Fame's class of 1991.

Mancha died at the Big Bend Hospice in Tallahassee in January 2011. He was survived by his wife, Sibyl, three children and four grandchildren.