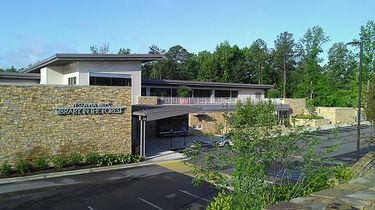 The Vestavia Hills Public Library is a public library owned by the City of Vestavia Hills and located at 1221 Montgomery Highway. It is part of the Jefferson County Library Cooperative. 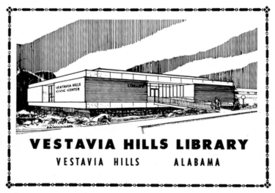 The 1969 library building as depicted on a bookplate

The library was founded in 1969 in the Vestavia Hills Civic Center at Wald Park. It moved in 1995 to a 23,000 square-foot former office building down the highway at 1112 Montgomery Highway, which was donated by HealthSouth. Briefly it was known as the Vestavia Hills Richard M. Scrushy Public Library in recognition HealthSouth's CEO Richard Scrushy, whose portrait hung in the entrance.

A study commissioned by the city as part of its 2002 long-range strategic plan determined that the former office building was poorly suited to the library's needs and a campaign began to plan a new library building. A sloping 9.8-acre wooded site adjacent to Boulder Canyon Nature Area and overlooking Patton Creek on the opposite side of the highway was identified and a Library in the Woods was conceived as a way to connect the library's mission to the opportunity for engaging the site's natural beauty with overlooks and trails. The building, which is designed by HKW Associates to be LEED-certified as a "green building", will have a planted rooftop garden irrigated by stored rainwater, locally-sourced building materials (including site-harvested timber), recycled products, and careful siting and construction management to protect the site's stream bed and large trees.