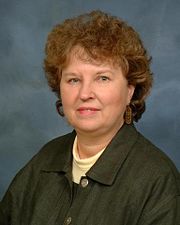 Virginia Sparks Volker (born 1940 in Jasper) is a retired biologist from UAB and long-term member of the Birmingham Board of Education representing District 2. She was most recently reelected in 2009.

Volker earned a bachelor's degree in biology and psychology from the University of Alabama in 1962, a master's degree in human anatomy from the University of Alabama School of Medicine in 1965 and a master's in public administration from Harvard University in 1990. Before leaving UAB she directed the UAB Titusvulle 2000 community partnership project and was president of the Greater Titusville Civitan Club in 2006–07.

Volker was appointed to the Board of Education in 1998 and won an election to keep her seat in the 2002 Birmingham City Council election. She was re-elected in 2005 and 2009. During her tenure, Volker has voted against all attempts to close and consolidate schools.