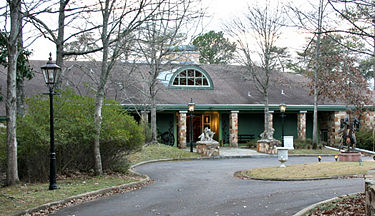 Entrance to the museum in January 2008

The Westervelt-Warner Museum of American Art was a privately-owned art museum located in the Anchorage Building at 8316 Mountbatten Road Northeast overlooking Lake Tuscaloosa in Tuscaloosa's North River district. It housed the collection of Jack Westervelt Warner, CEO of the Gulf States Paper Corporation (now the Westervelt Company). The museum, opened in 2003, was owned by the Westervelt Company, but operated by the Jack Warner Foundation. Warner's wife, Susan Austin-Warner, was the museum's last director.

In 2011 Westervelt's board began selling off some of the more valuable works from the collection to benefit shareholders. They were removed and sold privately or through auction houses without informing the Warner family or museum staff. The foundation suspended school tours and training programs pending a new agreement with the Westervelt Company about operations. Rather than come to an agreement, the company decided to terminate the lease on the Anchorage Building and move some of the remaining artworks into the Westervelt Company's headquarters offices.