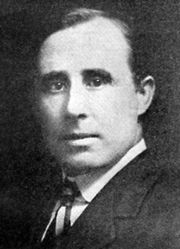 William Mailly (born November 22, 1871 in Pittsburgh, Pennsylvania; died September 4, 1912 in New York, New York) was a coal miner, labor leader and journalist. From 1895 to 96 he assisted Jere Dennis as Associate Editor of the Birmingham Labor Advocate.

Mailly's family moved to Scotland when he was 2 years old. He attended school in Liverpool and worked as an errand boy and clerk in youth. He voyaged back to American in the summer of 1889 and took work in brickyards and railways in Illinois. He moved to Alabama in 1890 and began working in a coal mine.

His participation in the United Mine Workers of Alabama and as a delegate to the Alabama People's Party led to his blacklisting from the mining companies after the 1894 miners' strike. He took a job assisting fellow AFL organizer Jere Dennis, the founding publisher of the Birmingham Labor Advocate.

In 1896 Mailly moved to Nashville, Tennessee and joined the Socialist Labor Party. He left that organization a year later to found a branch of Social Democracy in America. He served as a delegate to that group's 1898 national convention in Chicago, Illinois. Later that year he moved to Haverhill, Massachusetts to serve on the Social Democratic Party's campaign committee. He also returned to journalism as editor of the Haverhill Social Democrat.

In 1903 Mailly was elected executive secretary of the Socialist Party of America, serving until January 31, 1905. He then took a position as manager of The Socialist, based in Toledo, Ohio, remaining on the SPA's National Executive Committee.

In 1906 Mailly moved to New York to work as associate editor of The Worker and, later, managing editor of the New York Evening Call. He died in 1912 and was survived by his wife, Bertha, who herself served on the SPA National Executive Committee in 1920–21.