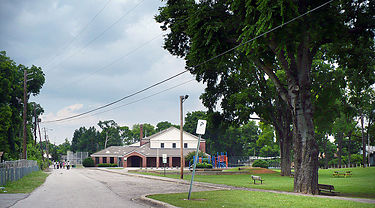 Willow Wood Park is a Birmingham city park located at 5312 Georgia Road in Woodlawn. It occupies the site of Woodlawn Manor, the former home of pioneer settler and Woodlawn founder Obadiah Wood.

Wood's family dedicated their estate to the City of Woodlawn before the 1910 Greater Birmingham annexation placed the community within Birmingham's city limits. They constructed a spring-fed swimming pool and the house and grounds were used as a neighborhood center.

In 2010 the recreation center was one of seven that Mayor William Bell proposed be temporarily closed as the city dealt with a severe budget deficit. The Church of the Highlands subsequently looked into the possibility of leasing the center to keep it open and provide programming.