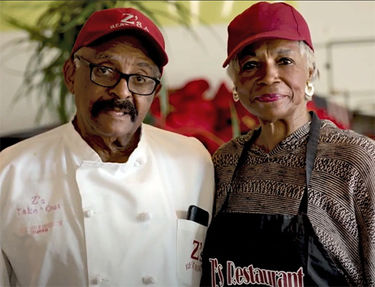 Zeke and Carolyn Hameen in 2020

Z's Restaurant was a meat-and-three restaurant located at 104 17th Street North in the 1628 1st Avenue North building. It was opened on August 8, 2008 by Ezekiel "Zeke" Hameen and his wife, Carolyn. The menu featured Southern or "soul food" cooking, but was also entirely pork free and refrained from using meat in cooking its vegetables. The restaurant was known for its bean pies and home made ice cream.

The restaurant, which initially accommodated 14 seats at four tables, was expanded with a banquet room in 2011. Soft gospel music was played for diners. The restaurant began hosting tour groups visiting the city on school field trips or Civil Rights tours. The banquet room also hosted numerous community events from birthday parties to empowerment workshops to Kwanzaa celebrations. Critic Andrew Zimmern sampled the restaurant's bean pie for an episode of his "Bizarre Food America".

During the 2020 Coronavirus pandemic the Hameens appeared in a "We Are Magic" video produced by Telegraph Creative to highlight the importance of small business owners as part of the Birmingham Strong campaign. The Hameens applied for small-business recovery assistance, but did not receive any funds and decided on April 27 to close permanently.