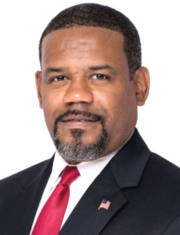 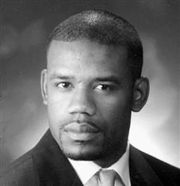 Adlai Marseille Trone Jr (born August 19, 1977 in Birmingham) is a financial planner, math tutor, and president of the Fairview Neighborhood Association. He is also a former professional football player and radio host.

Trone, the son of Birmingham Department of Public Works director Adlai Trone Sr, grew up in Birmingham and played little league football and baseball and participated in the Boys & Girls Club and Boy Scouts of America. He graduated from Hewitt-Trussville High School and was a walk-on and three-year letterman for the Auburn Tigers football team, starting all 11 games of his senior season at free safety. He missed the 1998 Peach Bowl due to a curfew violation.

Trone earned his bachelor's degree in finance and a master's in business administration at Auburn. He later earned a masters in financial planning at the University of Alabama. Trone played for the Birmingham Steeldogs in 2000 and 2001. He started as a defensive specialist, but also played at wide receiver and returned kickoffs.

Trone opened a financial planning office in Auburn in 2007. In December 2008 he was convicted of 2nd degree marijuana possession after a Baldwin County traffic stop. He subsequently moved back to Birmingham to pursue a career in education. He tutors students in Birmingham City Schools and provides financial planning services through Ameriprise.

Trone was a candidate for Mayor of Birmingham in the 2013 Birmingham municipal election. He pledged to focus on improving blighted neighborhoods, lowering sales taxes, and shepherding the school system out of state control. He promised to bring sound financial management to City Hall and to eliminate wasteful spending on entertainment events. His campaign slogan, "peace, education and prosperity," represented his formula for reversing the trend of young families moving out of the city. Trone came in a distant second to incumbent William Bell with approximately 10% of the vote.

Trone began hosting the Magic City Sports Talk Show on V94.9 in 2016. He also serves on the advisory board for the Offenders Alumni Association.