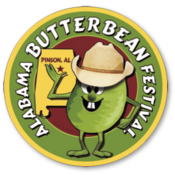 The Alabama Butterbean Festival takes place along Main Street in downtown Pinson on the Saturday before Labor Day. Honoring the locally grown butterbean, the festival is billed as the first, largest and only Butterbean Festival in the United States.

The event was conceived in 2006 by area resident Phil Sims as a means to bring together the members of newly incorporated Pinson as well as celebrate the area's history, which included the founding of Palmerdale (now part of Pinson) as a Subsistence Homestead Project of Franklin D. Roosevelt during the Great Depression. The event features arts & crafts, kid's activities, beauty pageants, athletic events and cooking contests featuring butterbeans.

The festival's mascot is Bucky Butterbean. In 2008 Bucky was "married" to a second mascot.

18,000 people attended the inaugural festival on September 2. Events included a butterbean recipe contest, a cornbread cookoff, a barbecue cookoff, a Tailwaggin' Pageant for dogs and both a 5K and a 1-mile footrace. 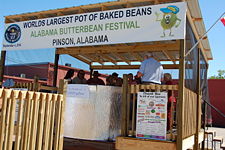 The fifth annual festival, expanded to a two-day event, was held September 3–4. The festival featured a Guinness World Record setting pot of baked beans, which totaled 1,010.65 gallons. The beans were cooked by Todd Jackson and his team from Jefferson State Community College in a custom built 4-foot tall, 86-inch diameter pot.

The sixth annual festival was held September 2–3 with an estimated attendance of 6,000.

The seventh annual festival was moved back a month, held October 5–6.

The ninth annual festival was held on October 3–4.