This article is about the 1925 building. For the 1990 building, see Alabama Power Company Headquarters Complex. 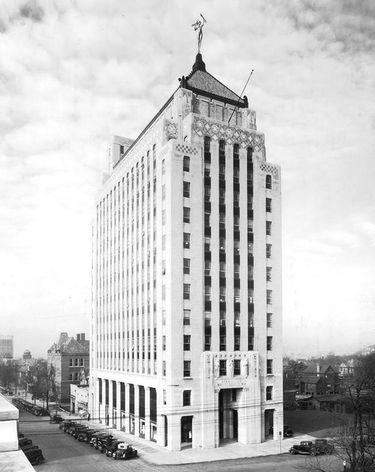 The Alabama Power Building is a 217-foot tall, 16-story Art Deco-style skyscraper, built in 1925 as the headquarters office of the Alabama Power Company, on the northwest corner of 18th Street and 6th Avenue North. It was designed by Warren, Knight and Davis, with the participation of an associated architect, Sigmund Nesselroth, who was employed at the insistence of the Alabama Power's general manager, Eugene Yates.

After reviewing sketches prepared by Nesselroth and the utility's engineers, William Warren and his partners made numerous changes to open up floor space by moving the elevator core to the back of the building, and to improve the proportions and massing of the exterior. The resulting facades, simplified in ornamentation and strongly expressive of verticality, were part of a new, non-historicized stylistic treatment becoming popular across the United States. Some have credited Nesselroth for injecting the new style into his association with Warren, Knight & Davis, but evidence suggests that the trend, already employed in the American Life Insurance Building, was not entirely new to Birmingham.

The tower's shaft is of undecorated buff-colored brick. The piers to either side of the corner towers project slightly and are spanned by brick spandrels, creating a heavier mass than the central section, where the inset spandrels are black-glazed terra cotta, uniting with the windows themselves in strong, vertical bands between the brick pilasters. The corner piers are capped with limestone and a checkerboard of red terra cotta tile one floor shy of the central tower's thrust. The four-bay central tower erupts in a geometric design of brick, stone and tile lozenges and squares. A more finely-detailed penthouse supports a steep hipped roof of Spanish tile with copper hip and ridge caps, crowned by the statue of Electra (a bronze casting covered in gold leaf, also by Sanford).

In the 1950s, the south facade of the building was decorated with a large Christmas tree made from strings of electric lights.

The building was restored in 1988, and a massive Alabama Power Company Headquarters Complex was added onto the north side, with a glass atrium in between, in 1990. 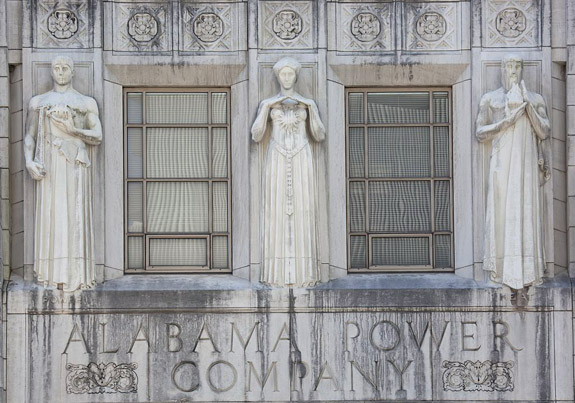 Relief carvings representing "Power", "Light" and "Heat" above the entrance to the building.