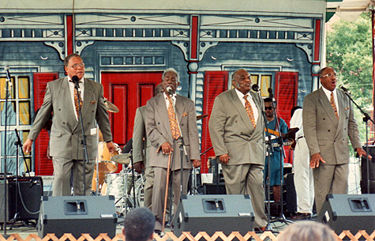 The Birmingham Sunlights is an a cappella gospel singing group, founded in Birmingham in 1978.

James, the son of Everette Taylor, Sr of the Four Blue Eagles founded the group with his brothers Barry and Steve and two other short-time members. Reginald Speights and Wayne Williams joined the following year, and a fourth Taylor brother, Everette Jr joined in 1985. Bill Graves replaced Williams in 1996.

The Sunlights sound developed as part of Jefferson County's gospel tradition and the traditional singing in the Church of Christ, which uses no instrumentation. The group has spent time learning from the Sterling Jubilees and the Shelby County Big Four to master traditional songs and performance techniques of the region.

The Sunlights have performed at the National Folk Festival and on U. S. State Department tours in Europe, Africa, the Caribbean and Australia. They also shared the Alabama Theatre stage with Garrison Keillor during a Blizzard of 1993 broadcast of "A Prairie Home Companion".