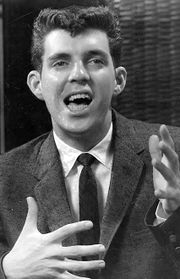 Robert Lyle Cain (born May 1, 1939 in Hartselle, Morgan County; died August 30, 2000 in Birmingham) was a singer, trumpeter and emcee who led the Cain Breakers band and co-owned the Cane Break supper club on 4th Avenue North with Harry Bell.

Cain was the son of Lloyd LaVerne and Helen Blake Swearingen Cain of Hartselle. He showed an early talent on trumpet and joined the Hartselle High School band when he was just nine years old. He attended the University of Alabama and lead the Alabama Cavaliers orchestra. He also began working as an emcee and hosted the Miss Alabama pageant for ten years.

Cain and Bell opened the Cane Break supper club in the 1960s and 1970s and hosted nationally-famed entertainers including Pete Fountain, Al Hirt, Bob Hope and Boots Randolph. Ray Charles and Johnny Cash also visited the club. Cain and his band, the Cain Breakers performed nightly when they weren't touring the South or performing in Las Vegas, Nevada. He later opened the Cane Break Lounge at the Parliament House hotel.

Following a rededication of his life to Christian service, Cain closed the nightclub. At the suggestion of Charlie Colvin he turned to Gospel music as a way to use his musical talent in support of that calling. His album "New Song" earned notice from Bill and Gloria Gaither, who invited him to join their "Homecoming" evangelical program.

Cain died from cancer in 2000. He was survived by his wife, Penelope and two children, Robert and Lacy. A funeral service was held at Trussville First Baptist Church followed by burial at the Clear Springs Cemetery in Allgood.