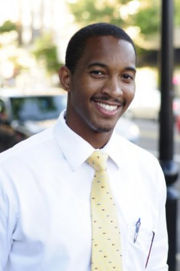 Davis grew up in Baldwin County and graduated from Daphne High School. He was awarded a presidential scholarship to Faulkner State Community College and transfered to UAB to complete his bachelor's degree in psychology and sociology. While a student he volunteered as a tutor at Center Street Middle School. After graduating Davis worked as a case manager overseeing therapy provided to foster children. In 2005 he left to take a job in the hospitality industry, in which he still works.

In 2007 he helped organize a "Freedom Bus" in protest of the treatment of six teenagers convicted of battery in Jena, Louisiana. He was also an unsuccessful candidate for District 5 in the 2009 Birmingham City Council election. As a City Council candidate Davis supported the completion of the domed stadium as part of the economic development of the downtown area. He pledged to work toward the redevelopment of demolition of run-down abandoned properties in District 5 and to support the development of a trolley system as a means of reducing traffic and CO2 emissions downtown.

Davis and his wife Summer are active members of the Guiding Light Church.